In Search of the Illinois Central deep in Mississippi 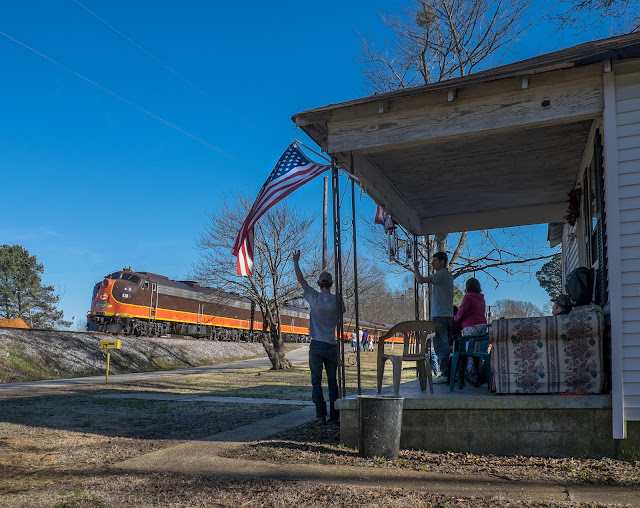 A wave from the porch from the locals at Tillatoba, MS. . .

How about joining me, I'd asked, on a long weekend trip to the middle of Mississippi to see the ghost of the Illinois Central brought to life, in an excursion train of beautiful chocolate and orange passenger cars pulled by a pair of E8's on the ancestral rails of the Mainline of Mid-America?

Sure, it was at least a 10-hour drive in both directions. And while Chris and I were both IC buffs, Mississippi was largely unknown territory--certainly to me, who'd spent precious little time south of the Mason-Dixon Line, none of it in Mississippi.

But events like this one sponsored by the Memphis NRHS Chapter on Ed Ellis' Iowa Pacific Holding's Grenada Railway were too fleeting and too special to pass up.

The single daily "City of New Orleans" schedule that survived into Amtrak had been shifted off the former IC's mainline between Memphis and Jackson in 1995 onto the flatter, straighter Yazoo Valley district in 1995; since then, IC's former passenger mainline had been downgraded, truncated, shortlined, and threatened with abandonment--until 2015, when Iowa Pacific partnered with the the North Central Mississippi Regional Railroad Authority to revive the line. And with the revival of freight service came opportunities for occasional passenger operations: trains to show off the railroad to local residents; Holiday Express trains for kids; and now in late January, the return of a 10-car streamlined passenger excursion that rekindled Ellis' memories as a boy growing up in the IC shop town of Paducah, Kentucky.

Miss this? My earliest railroad memories were of an IC passenger train seen from a rainy platform in Homewood, Illinois circa 1963, holding my dad's hand as an unknown IC train throttled away. What train? I have no way of knowing: at the time, a dozen IC passenger trains--not to mention dozens more electric heavyweight commuter runs--called at Homewood each day. Chris was a New Orleans native who grew up in the Amtrak era, regaled by tales from his father, Michael, a life-long railfan, of riding IC trains. Given our family histories, this trip couldn't be missed: not with the often tenuous lifespan such opportunities enjoy. Carpe Diem! More than ever, that seems to be the best way to approach something like two E8s and ten passenger cars clad in chocolate and orange paint operating through mid-Mississippi. 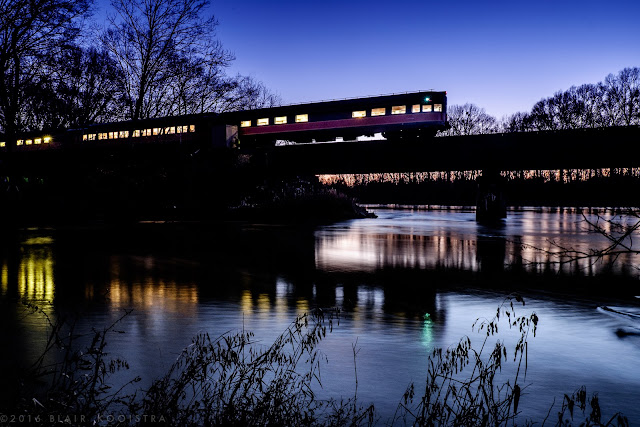 It was a long drive--nearly 600 miles and 12 hours, throwing in a bit of en-route rail photography and exploring. Even so, we used every minute we could getting there, pulling up in the parking lot in downtown Batesville, MS a couple of minutes before 5pm--departure time of Friday's night photography special. Around two-dozen die-hards boarded the beautiful IC teardrop observation car "Paducah"--with six wheel trucks, no less--for the short trip north at dusk to the Little Tallahatchie River Bridge. 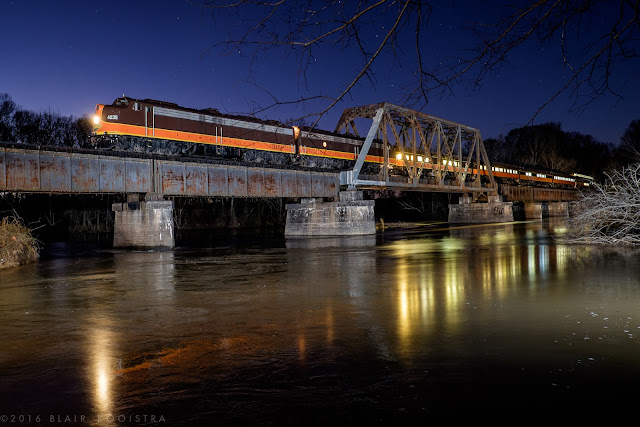 Tallahatchie River Bridge? As in? While no doubt many on the train were humming verses of Steve Goodman's "City of New Orleans" to themselves, I couldn't stop Bobbie Gentry's 1967 country-pop hit song out of my head, especially as I eased my way down a leaf-slicked embankment along the river referenced in the song.

Our train posed on the bridge above the fast-flowing tributary of the Mississippi as night strobe gurus Steve Barry and Casey Thomasen and several assistants illuminated our train against a sky filling with evening's first stars. It was an amazing scene. . .

Back on the train, we disembarked at Batesville to photograph a recreation of a nighttime meet between E-units and tear-drop observation.  Was it coincidence or were the organizers of the shoot aware that in the January 1964 "Official Guide", the Panama Limited and the Southern Express met here. . .Batesville. . .at 10:08pm. 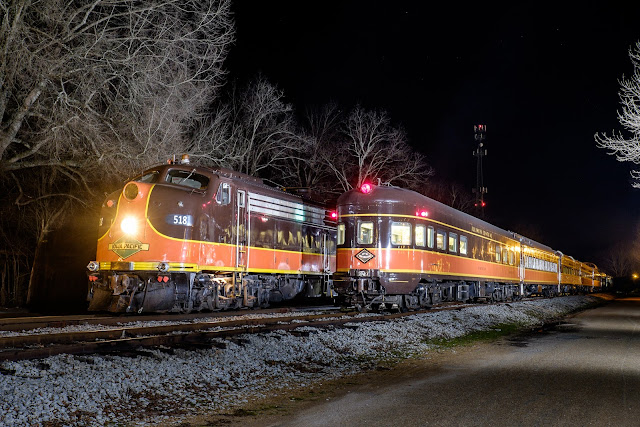 What a meet between the southbound Southern Express, left, and the northbound Panama Limited must've looked like at Batesville, MS, circa 1964. . .

The line between Jackson and Memphis once was the preferred route of the "Mainline of Mid-America," until its downgrading in 1995 during the administration of Ed Moyers, who slashed route miles on the IC, spinning off several lines and abandoning many others.

The IC at one time dominated western Mississippi, with three through routes between Memphis and its east-west line across the middle of the state. The mainline was a curvy, hilly stretch of single track through Grenada connecting Memphis and Jackson, known in popular culture for being the railroad engineer Casey Jones met his demise on, near Vaughan, a short distance north of Jackson.

Also from Jackson, a secondary route arced along the eastern edge of the Mississippi Delta, through Yazoo City and Greenwood. Flat and mostly straight, this was a freight-only railroad. The third route paralleled the Mississippi River between Vicksburg and Memphis, serving Clarksdale, hub city of the Delta. A handful of branches connected these mainlines with small towns and the cotton industry.

Into the mid-1960s, several passenger trains a day traversed the Mainline: The sleeper-and-coach equipped Lousiane and all-coach Southern Express, daylight and overnight respectively accommodation trains that stopped at all stations doing mail and express work. Premier service was provided by the All-Coach City of New Orleans and All-Pullman Panama Limited. The City was a daylight train, the Panama operated at night.  And serving the mostly black passengers of the Delta was the Delta Express, a coach accommodation that departed Memphis ahead of the Lousiane, worked its way south 150 miles to Greenville, laid over nearly 90 minutes, then turned back north to arrive in Memphis an hour ahead of the northbound Lousiane.

In Jim Crow Mississippi, no doubt the coaches on the Delta Express, Lousiane and Southern Express were segregated. IC probably made a good profit on the Delta Express during the Great Migration; the train is still listed in my January 1964 Official Guide. I'm guessing it came off shortly after the Post Office pulled its mail contract with IC in 1967.

With Amtrak's creation in 1971, the Panama and City combined under the City of New Orleans name; in 1995, the train moved to the Yazoo District, which hadn't hosted a passenger train nearly 50 years.  The Main Line faded in importance, finally spun off by IC's new owner, Canadian National, in 1998. The new owner, a subsidiary of railroad salvage firm A&K Railway Materials, operating as Grenada Railway, failed to make a profit on the 175 mile line between Memphis and Jackson, and embargoed the line south of Grenada in 2011. In 2015, the North Central Mississippi Regional Railroad Authority purchased the entire rail line for $43 million from A&K. The state contributed a $30 million bond, while Iowa Pacific Holdings paid the remaining $13 million for the operating franchise, and aims to reopen the line through to Jackson. 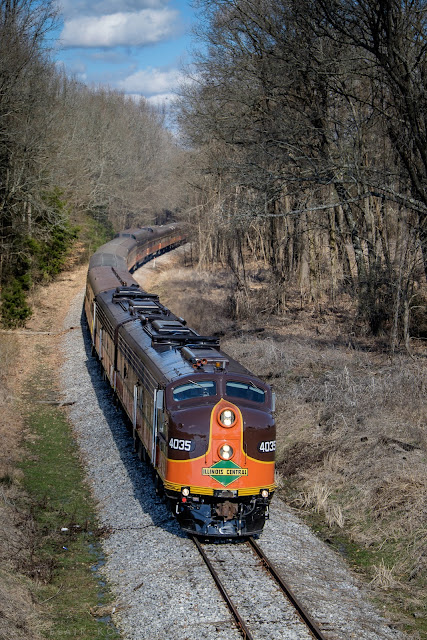 Passing beneath US 51 south of Oakland, MS 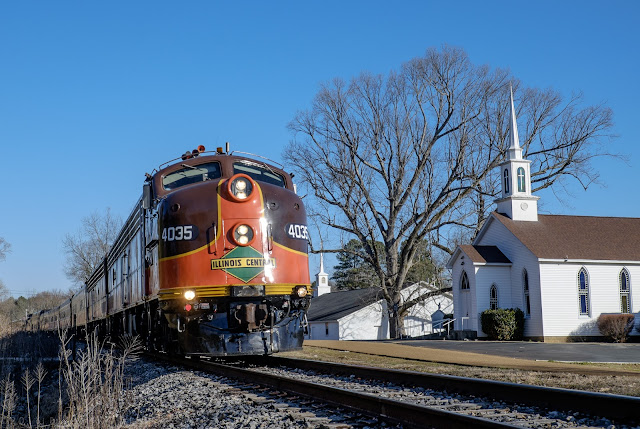 Chris and I cut it close again the next morning. We tarried just a few minutes too long in Clarksdale photographing the decaying splendor of Mississippi Delta Railroad's franchise in Clarksdale--a former IC line. Thus, we arrived in Batesville just as the special departed: on the advertised, 09:00.

A few miles south of Batesville, we set up for the first of at least a dozen photo opportunities in Courtland, where the IC mainline snuggled up to two white-spired churches. There's be lots of opportunities to photograph the train next to churches. Folks in this part of Mississippi are into their religion. We gave our thanks several times that day, as the beautiful weather, the train's slow pace, and relatively good access provided the assembled congregation of train chasers with the chance to turn-back the clock. 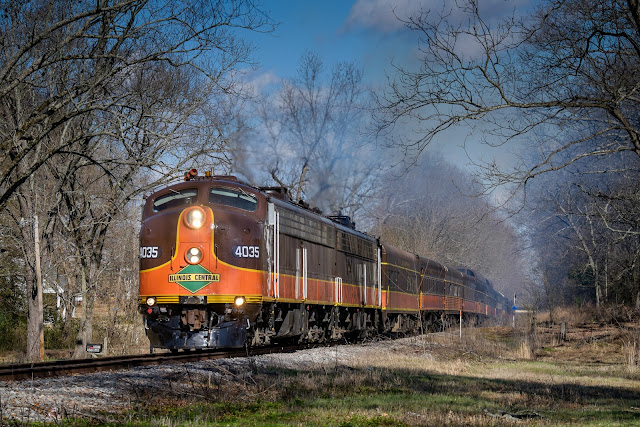 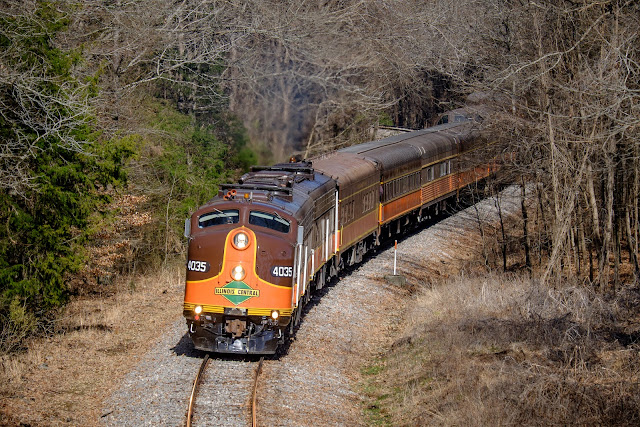 Beautiful s-curve view off US Highway 51 south of Oakland: many photographers and no shoulder on the very narrow 2-laner. . . 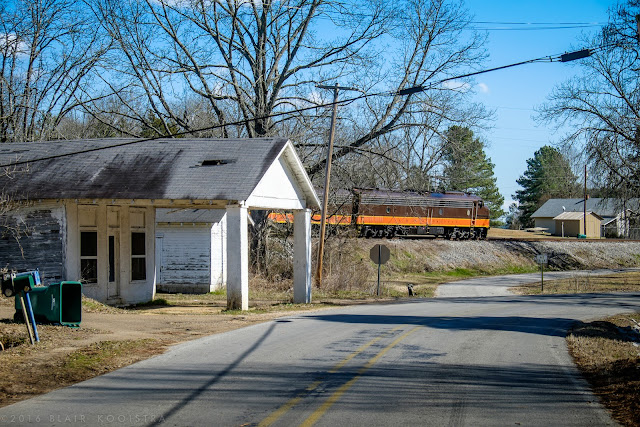 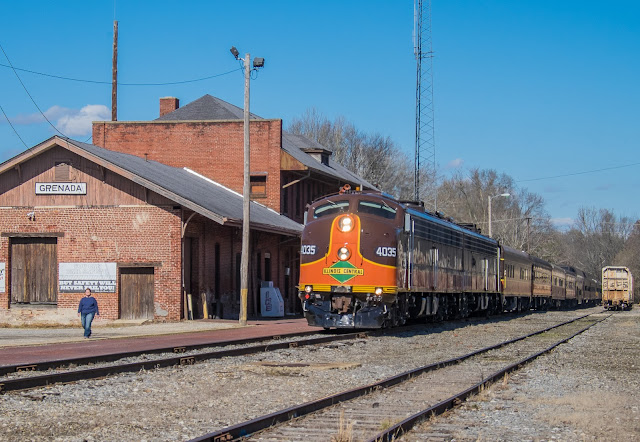 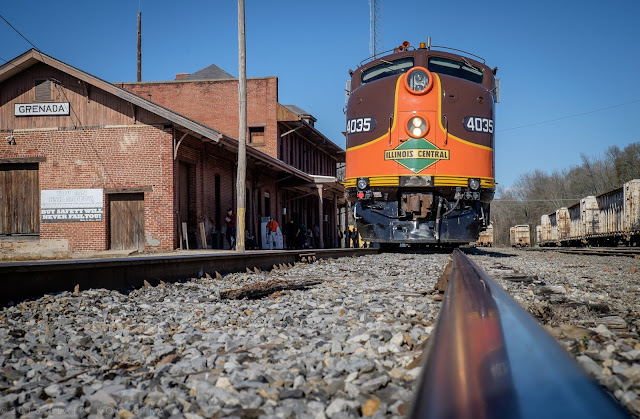 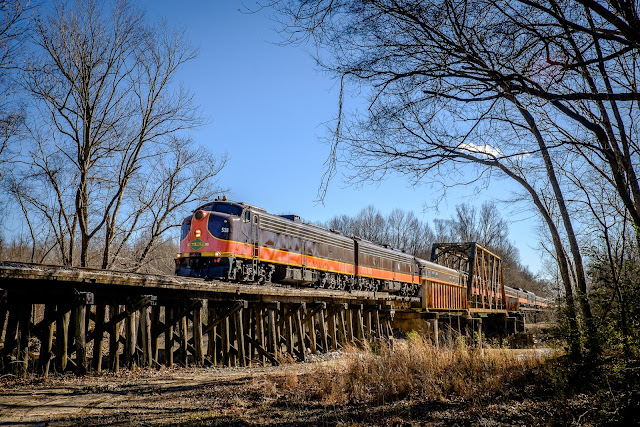 
Over 300 tickets were sold by the chapter for the train, and while not all riders were railfans, the organizers certainly pulled out all stops with several photo runbys for photographers--at locations mindful of the best light for the time of day.

Chris and I certainly felt we'd done quite well for ourselves after scoring the last shot of the day right at 5pm as the train entered Batesville: a beautiful back-lit "glint shot."

A beautiful sunny day trackside chasing a ghost from the past. The perfect cure for the "dissapearin' railroad blues. . . "


A full gallery of photographs from the day's chase is available at: 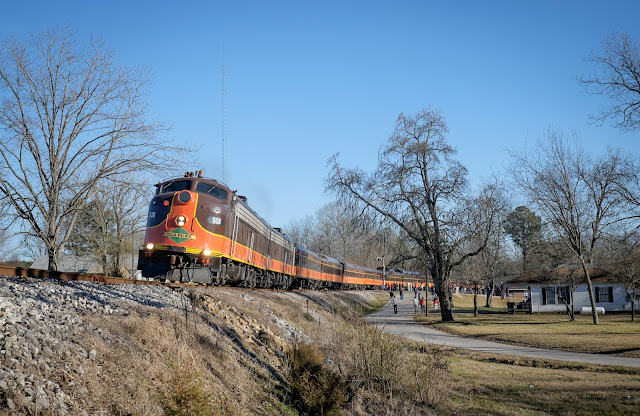 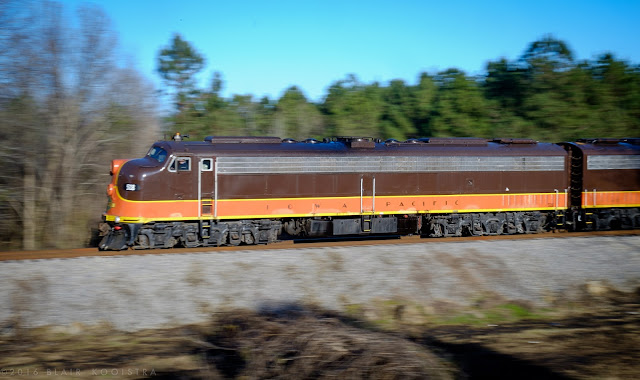 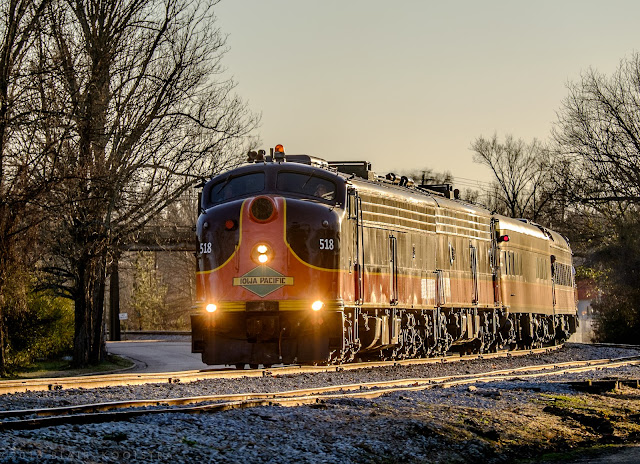 End of day glint arriving in Batesville at 5pm. . . 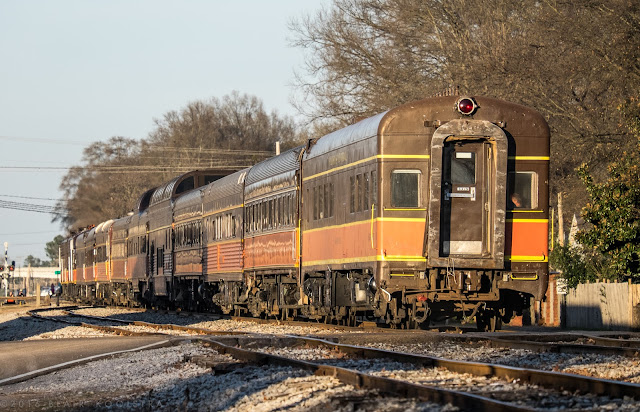 I'm Christopher's dad, and while I only rode IC passenger trains three times, I did see them quite often. Up until until 1967 there were four trains each way at New Orleans, but in March the LOUISIANE (Nos. 3 and 4) and the SOUTHERN EXPRESS (No. 25) were discontinued south of Memphis, followed by the CREOLE (No. 8) in December. This left just the CITY (Nos. 1-2) and the PANAMA (Nos. 5-6) until the advent of Amtrak.

One fond memory during the LOUISIANE's last year of operation was going to Carrollton Avenue Station, 2.6 miles from New Orleans Union Passenger Terminal, around 4:30 PM and getting to see the southbound LOUISIANE (No. 3) and the northbound PANAMA (No. 6) pass within a few minutes of each other, or even meet at there. No. 6 departed 15 minutes after No. 3 was due in; and while No. 6 almost always left on time, No. 3 was often a little late which allowed me to see both trains.

During the summer, I could go to Carrollton Avenue and see the northbound LOUISIANE and the westbound SUNSET on one visit, as these trains left 31 minutes apart, the IC at 11:30 AM and the SP at 12:01 PM. These were the only trains in the middle of the day.

Notice in the stagged meet at Batesville that the E-unit is disguised as Central of Georgia 812. The CofG had two E8's (811, 812) and they spent most of their lives in IC colors. I only remember seeing one of these once, leaving on the northbound CREOLE.

I'm interested in reserving this place because choosing the right venue which does not favor a specific culture becomes difficult. Halls here have fountains and elaborate pictures. Some venues in San Francisco display traditional artifacts and paintings.

Superb post, we enjoyed each and everything as per written in your post. Thank you for this informative article because it’s really helpful, I really like site.
Please visit our website : Packers And Movers Mumbai

Packers and Movers Bangalore as a Services providing company can make all the difference to your ###Home Relocation experience. Bangalore based Company which offers versatile solutions, Right team that easily reduce the stress associated with a ✔✔✔Household Shifting, ***Vehicle Transportation. we help things run smoothly and reduce breakages and offer you seamless, Affordable, Reliable Shifting Services, Compare Shifting Charges @ Packers And Movers Bangalore

This is the official page for Narmada Packers and Movers Bhopal. With the aptitude in the packing and moving administrations, our branch at All location in India has been expertly conveying fulfilling results the general population crosswise over India. This organization has been giving administrations remembering the passionate estimation of the clients conveying the qualities and morals of our nation.

We are giving moving administrations to quite a long while and gain incredible notoriety in the market. Narmada Packers and Movers can make the moving procedure calm and faultless for you as we will serve you with appropriate consideration and capability. As one of the famous movers and packers in Bhopal, it is our duty to deal with your effects and important things with fragile consideration to counteract any harm during transportation. Our group of specialists will securely stack all possessions in the moving trucks and seal them defensively in the capacity boxes.